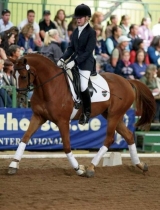 Valintino is by the imported Weltmeyer son, Walton. He was purchased by young rider Ashleigh Howard as a 3yo. As a 4yo, Ashleigh and Valintino claimed 4th place at DWTS, a great achievement by this young horse and his then 14yo rider. He was highly successful in Inter School competitions, winning Medium National Champion. At the Victorian Dressage Festival, the pair placed 4th in the 6yo class. This great run continued when they were awarded Reserve Medium Champions at the Young Rider Championships. Valintino has since been sold where he is continuing his success as show horse with numerous championships and many placings at Royal Shows.