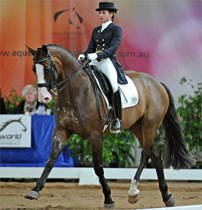 Greenoaks Weltmann VEH was purchased in 2010 from Heath Ryan as a Small Tour horse. He is a much loved member of the team and is always a gentleman to be around. He has had much success with his rider Lilah Nieuwland including 5th in the Inter 1 Freestyle at Equitana 2010, 4th in the Inter 1 Freestyle at Boneo CDI 2011 and 7th place in the PSG at Sydney CDI 2011. After a break, Mendy is back and ready to start competing at Inter A and B level, making his way to Grand Prix.