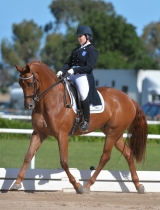 Florin is another successful son of Classique VEH and was also purchased as a 3yo by a young rider. Florin and his young rider have had much success in their time together. It has been very exciting to watch them climb the ranks. They are currently competing at Small Tour level and training Grand Prix, an indication Florin’s fantastic temperament and trainability. Some of their achievements include 3rd at Dressage with the Stars in the 1stround 6yo, FEI Junior Champions at the Young Rider Championships, participants at Master Classes at Equitana, 2 time finalist in the Aachen Challenge, winner of the CDI-Y Individual test at the National Championships and members of the National Young Rider Squad. At Boneo CDI the pair came 3rd in the Small Tour Championships.