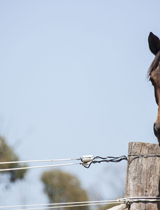 Chequille was the shining overall winner of the 2004 Stallion Performance Test in Neustadt/Dosse with 137.37 points and the reserve champion in both dressage and show jumping. In this Brandenburg horse paradise, he was also the champion of the 30-day test. With Chequille, Brookhouse Stud is introducing a first class, highly acclaimed performance champion, registered with the Zangersheide studbook and Holsteiner bred. Level-headed, rideable with wonderful basic gaits and an unheard of jumping talent with: scope, leg usage and potential that can only be described with superlatives.* Chequille has already proven his versatility in the competition ring. He was fifth in the highly prestigious Challenge-Cup in Wiesbaden and was a winner regularly in show jumping classes at A- and L-level. Ranked second with a 9.2 score at the qualifier for the 2005 World Championships for Young Dressage Horses in Verden and then made his way through to a successful Grand Prix Dressage career with British Olympic dressage rider Emma Hindle.