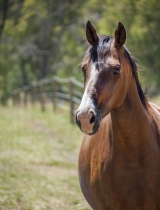 Northern Marta is by the great imported Falkland Victory who was a prominent stallion in Australia, producing many successful FEI dressage horses including 2000 Olympic team member, Northern Aphrodite. He passes on his impressive movement and trainable temperament. He has also produced many broodmares who to throw these quality attributes.

Northern Martha is out of a mare by Northern Congress. Northern Congress was Northern Warmbloods foundation sire and was known for his temperament and producing horses with good paces and trainability, including many FEI level horses.

Our weather forecast is from Wordpress Weather